Dry fly hackle, a guide to selecting the best hackle and in turn tyingbetter flies, maybe even saving some money too!

Well, as I sit here pondering what I need to tie my next batch of flies I thought I'd share some knowledge. Learning the hard way with hackle sucks, it's expensive and can really hurt your progress as a tyer. So, I'm offering a bit of help. Keep in mind there's usually exceptions to the rule and this is a whole lot of opinion with some fact.

1, color. I have about a dozen colors here in my stash. The truth is though you really only need four, maybe, five or six.....  White/cream, brown, grizzly and dun. The optional niceties are ginger and black. Those first four are the basics and I'd say by far the most important. Now, that said there's a ton of shades of natural colors that are really nice to have some of those are medium dun, blue dun, light ginger, dark ginger, badger, furnace and just for the rarity as well as the unique effect, cree. In truth it can be hard to tell some of them apart once wrapped. I really can't stress the first four enough though.
I always use barred colors if I can. I think barred colors usually look better and some go as far as to say barred colors give a appearance of movement. I'm not sure of the last point but I WANT to believe!
Dyed colors, it gets crazy right here! You can find many colors like yellow, olive, orange and many more. The two I use are grizzly dyed olive and grizzly dyed brown. If you live on a tail water yellow might be a good one to have, I used to tie a lot of sulphurs with a yellow hackle when I lived close to a great tail water but remember that light ginger or cream also caught just as many fish....

Did I mention the first four? I really want that to stick with you.... Hell, you could get just three colors and be set for most patterns. Cream, grizzly and brown.

2, Quill. this is the make or break issue for me and thus why I really only will blindly buy necks from two growers, with everyone else's I want to really get my hands on them before I commit to buy. What I look for is a very fine quill that is not prone to twisting but is still strong enough that I'm not breaking them all the time. This sounds easy but its not always!

The quill on a good neck is almost always going to be thicker than the worst saddle this point is one of the two major reasons I like to tie with saddle if I can. If you get to take a few necks out of the package and gently brush some feathers aside you can get a good look at the quill if its fine you will be able to see this but also you'll notice that after moving the hackle over its not going to move back into position quite as much due to a more supple quill. If the quill is thick and stiff you may end up with ugly flies.

Twist, this one is harder to pick up on and you really just don't know until you tie with it! If you know of a way to spot a hackle that's gonna twist please clue me in!

3, Length. This one for the most part is pretty obvious assuming there's very little web. As a example I have a neck that the feathers are not in the least short but have much less web free hackle than most of my other necks. This combined with the hackle from this neck is prone to twisting makes it a neck I wish I had not bought.
While we're on length I'll talk about saddle, good saddle is the shit! Long feathers that are so long you don't need hackle pliers when you use the stuff and has a finer quill than just about any neck. Hard to beat! There are some disadvantages to saddle those being that a saddle usually only has hackle that is going to tie flies in two or three hook sizes and has been hard to get due to the salons buying it up. The feather fad is about done so this year you should be able to get what you need if you know where to look.

4, Where am I gonna find the good stuff?
Well, many places. You have a couple good options and a few that are not bad just more a crap shoot.
Online, eBay can be a great way screwed but if you look hard you can find some real deals from great sellers but if I've told you anything you don't know in this article eBay may not be a good option for you. Elsewhere on the Internet you can find great retailers usually the smaller operations are more willing to give you more personalized service. The shop I work at is one of them. If you need something specific, call and we'll go pick a neck or saddle to suit your needs. in particular with saddles this is very important because of the narrow size range. Generally if you say to a commercial fly tyer I need material x for pattern y they can  probably find you what will work well, this is where the mom and pop fly shops that tie a lot of flies in house really are unbeatable even if you're half way across the country.

Direct from the grower. A few operations offer direct sales, the two I am willing to vouch for are Collins Hackle Farm and Clearwater Hackle(formerly Conranch Hackle).
Collins necks tend to have incredibly fine stems that don't twist and the necks come with the saddle patch included, killer value! Call Charlie, he'll get you setup!
Clearwater, I have not ordered anything from them since the new owners have bought the flock but the saddles are good and the older necks I have from Conranch were pretty similar to metz stuff of the same vintage but the quill seemed stronger and a touch more pliable. They do offer some unique soft hackle products worth checking out but that's another article!

A update on Clearwater Hackle. Great people and good stuff! 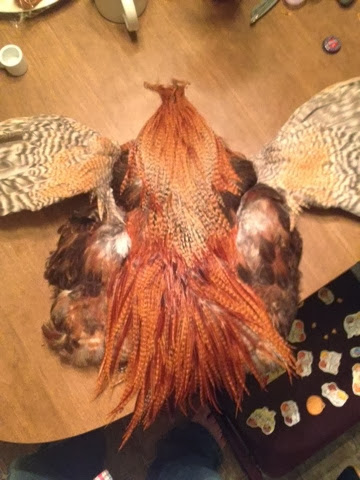 Lars sent me a whole skin, unreal amount of hackle there!
Posted by Unknown at 9:23 AM