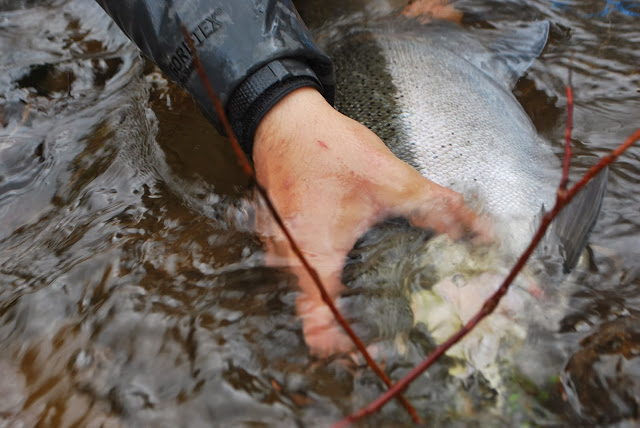 He tried to forget about it and just be present in the moment, to enjoy the place and its quality. "This is what you need" is what he told himself over and over.She was vague, uncertain in everything but her desire to run.

The first steelhead exploded on the surface of the water with fury and rage coursing through her every cavity. "How could you do this to me" she thought.She ran. She ran so far downstream through the chop and the gut of the river that he feared was already losing all touch and contact, into the backing of the flyline and gone.She was unhappy and was taking control, its was much more than her showing him what she was capable of, it was survival, it was primal.It was pure emotion and strength and it seemed unstoppable to him.What else could she do but run?

He went blank in those first moments, almost completely unable to fight back or even respond to her action."I dont want to fight you" he thought as she continued to tear away from him downriver. "I just want to hold you in my hands, look into your eyes, marvel in your colors. I dont want to hurt you". He wondered why he was there at all in those terrifying moments when he lost control. Its these moments he remembered, these brief moments imprinted into my being that become part of the solution to everything, thats why he was there.

"I cant conquer this thing. I cant force her. Its a dance not a fight" She stopped. In the eddy of a midstream boulder she breathed deeply, still in panic and in survival mode but more composed and sure of herself now. The line went completely slack and silent while she hid there.His heart fell when life connection between the two creatures had lost its movement and grace. He reeled and reeled and ran and ran downstream, he hadn't realized how quickly it had happened and how much space had separated the two. "Its still slack, I've totally lost her. The most beautiful thing I have ever seen is gone" Frustrated and tormented he slapped his rod on the water and threw up his free line hand the air, pleading with the living river to help him. The river never answers prayers." This cant be it, I let her do all the right things!" He was right, he had applied just enough pressure, the drag was perfect, he didn't try to force her in too quickly. "Just relax, let her make the moves. You know where you stand and what you want" She had to want it too in order for it to happen. Its not a fight. 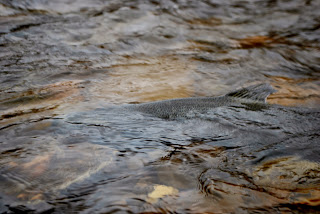 The unfamiliar vibrations of his frustrated flailing on the bank stirred something inside her.The line went tight again, he feels a head shake, a sweet harmonious head shake and his heart grew. He was connected again,the fly was still in her mouth. The initial prick that bound the two from the beginning was still there even when the connection of rod and line that telegraphed their dance had vanished. The fly was still in her mouth,That space and slack that had devastated him had given her enough time to remember the prod of the fly in her mouth and the emotion that it stirred within.

Now there was hope, dangerous hope though, because it was far from over. "This will never end" he thought. " Thats not the point " she thought. He came tight on the line and was directly across the river from her and her boulder home. He felt it again and his heart continued to soar. She ran. This time upstream, out of the heavy flow and up through the walking paced current closest to the bank. He saw her shape for the first time without having to imagine it. "Shit....Shit shit!" She was far more than he could handle, than he deserves. Felling the pressure again, she turned downstream in another furious run, determined to put thousands of miles between then, for her to return to her center of peace, to find herself free again. But the fly was still in her mouth and she felt that pull nagging on her,she couldn't possible ignore it. Still, she ran towards the end, the head of the riffle that was the precursor to the brawling rapids downstream. It has to go down at the riffle."If she goes down there and into the rapids, its all over" he thought. Is that what she wants? But the fly was still in her mouth. 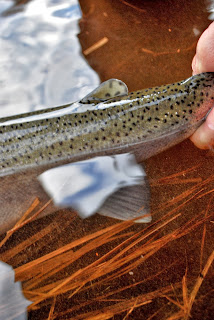 "I have got to do this. This is the fish." The one that explained why he was there at all. Vicious head shakes vibrate through the line and rod, throbbing deep as her run slowed. She senses the riffle as well. Something inside her made her stop. She knew that to descend that torrent meant more pain. She didn't want pain. He can feel her torment below the surface through their connection of rod, reel and fly.

He makes his move and clamps down. The net man is there by his side knee deep in the high, fast and turbid water. The first attempt is always worthless, its almost like she knows and wants to toy with you in those moment, one last chance to break your heart. She races towards the light and glare with her whole body in motion and her life comes into a surreal slow blur.He senses this moment only because he has let go of his mind now, its primal now. Something deeper controls his movement, actions and reactions. A deep roar in him wants it so bad.It all seems so mysterious to him, her whole life cycle and its purpose. " I fucking love everything about her" he finally says out loud. The net man is so focused he doesn't hear the lament.

More debris floats down the river. It all happened moments after a white out hailstorm thrashes the valley. Its one of the most beautiful things he has ever seen. Dead and dying salmon litter the banks and lifeless corpses of fish float down the main river channel. Their smell is pungent but seems full of life and hope at the same time. The side channels of the river seem magical to him and he spends a lot of time walking their banks and watching. Here, the mystery is revealed in plain sight. Everything seems much clearer when he comes back from those walks after watching spawning salmon. There, he does not intrude into their task and is content to observe their majesty. They have made it, this is it and they deserve peace. He could sit and watch them spawn forever. He was 3 casts in after taking a walk on the backwater to watch them when he hooked her. Even now in the seemingly end of their dance, his mind wanders to the slower currents of the side channel and a sense of peace overwhelms him.None of this matters, yet it is somehow the most important thing he has ever done. Its all worth it."Please.....I just want to hold you." They will both remember these moments for the rest of their lives. 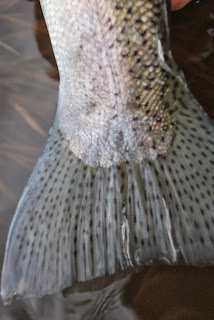 He applies more and more pressure and reels in faster now. It will be over soon. The fly in her mouth is too much for her to ignore. She allows it to lead her and no longer fights it.The net man lunges and she slides into the net. The net mans unfamiliar touch frightens her into a fury. "This is the end" she thinks. Now, he slides his hand under her slowly and he can feel her relax. He places his hand gently under her head to support her beautifully massive and strong head. The other hand firmly encompasses the base of her tail. These things deserve respect and attention. If you dont respect them, you dont deserve them. This moment when they are both in each others embrace is what the very climax of it all and they both have accepted it now. She relaxes under his gentle yet firm grip that holds her in control.

What she did was so impressive. He is awe that any of it came together at all. There was a purpose all along but the result is always unsure. His mind comes back into focus again and the slight shake in his hands begin to fade and settle.The image of the side channel is no longer with him. She has to continue and he knows that deep down. He cannot possess this creature, it is not his to have. He knows his place in her time has ended. He wants to kiss her so bad.

Fully back in the water now he takes his hand slowly away from under her head where he had cradled her through the final moments of their time. She pulses and he feels her whole life force shake throughout her body. "Jesus Christ. She is so beautiful." he says to the net man.He releases his hand from the base of her tail when she throbs again and he lets go loosely while his index finger faintly touches her tail as she slide away and beings to disappear into the depths of the raging river again.The cold damp smell of fall and rotten salmon fills his nose and the rain starts up again as he watches longingly as she vanishes from sight.


He sits on the bank and smokes a cigarette and wonders if he will ever feel that way again. They are steelhead afterall. 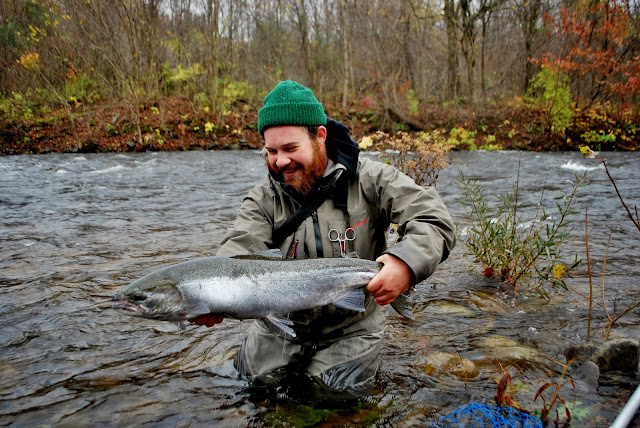